Drax the Destroyer is a member of the Guardians of the Galaxy, which also consists of Star-Lord, Gamora, Groot and Rocket Raccoon. He vengefully pursues Ronan the Accuser, whom he believes killed his family. 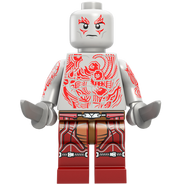 Français
Community content is available under CC-BY-SA unless otherwise noted.
... more about "Drax the Destroyer"
RDF feed
Accessories
Two knives +
Appearances
LEGO Marvel Super Heroes
76021 The Milano Spaceship Rescue
76081 The Milano vs. The Abilisk
LEGO Marvel Super Heroes 2 +
ArticleRating
4 +
Image
'"`UNIQ--tabber-00000001-QINU`"' +
Img1
Drax_GOTG.png +  and Drax_Destroyer.png +
Img2
DTD.PNG +  and DraxMarvel2.PNG +
InfoboxTemplate
Minifigure +
ShopDescription
Drax the Destroyer
Fueled by a … Drax the Destroyer<br />Fueled by a personal vendetta against those who cost him his family, the rough-edged warrior called Drax the Destroyer has room in his life for little else besides revenge. To this end, the heavily tattooed Drax has long relied upon his proficiency in battle and his razor-sharp blades to do his talking for him. After making a tentative alliance with the Guardians of the Galaxy, the untamed Drax must learn to put the needs of the universe before his own. the needs of the universe before his own. +
Theme
Super Heroes +
Title
Drax the Destroyer +
Txt1
Ravager +  and Comics +
Txt2
Vol. 2 +
Variations
Ravager
"Vol. 2" +
Years
2013, 2014, 2017 +
Advertisement