E.T. also known as the Extra-Terrestrial is a minifigure released on 2016.

E.T. was a short brown alien that was accidentally left on Earth by his botanist colleagues. During his brief stay on Earth, he became Elliot's pet alien after he was found. While living at Elliot's home, E.T. becomes fond of Earth food (mainly fruit and vegetables) specifically Reese's Pieces and beer. He did not like the taste of potato salad. After reading a "Buck Rogers" comic strip about him being stranded on an alien world and builds a communicator out of what's leftover from his damaged ship to call for help, E.T. was inspired to try it himself in order to return home. With the help of Elliot and his siblings, he managed to create a makeshift communicator made of household objects and was successfully able to "phone home". The next day, the spaceship returned to pick up E.T and return home. The movie ended with Elliot and his family watch E.T.'s ship take off, leaving a rainbow in the sky. 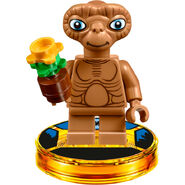