For other subjects including the name Echo, see Echo (disambiguation).

Echo is a playable character in LEGO Star Wars III: The Clone Wars, based on the Clone Trooper of the same name in the Star Wars universe.

Echo's design is the same as any other Clone Trooper's- white legs with a black hip joint, white torso with black hands, a black torso print, and a white helmet with a black visor and details. In the game, he comes armed with a rocket launcher, a heavy weapon which can destroy several enemies at once within the blast radius, and destroy silver objects in the game. He also has the ability to throw an EMP grenade, grapple, perform a single-jump, and place bombs in designated clone trooper areas. Echo is unlocked after playing the story mission which he appears in: General Grievous - Chapter 5 - Rookies.

CT-1409 (ARC trooper indenfication CT-21-0408), nicknamed Echo, was a clone trooper and as a cadet was a member of Domino Squad. He got his nickname due to his tendency to follow orders and remind others of the rules, thus "echoing" the orders to the others. As a clone trooper, Echo was stationed on a listening post on the Rishi Moon along with Hevy and Fives amongst others. When the base came under attack by Droid Commandos, the group of rookiees were forced to flee the base. However, after meeting Captain Rex and Commander Cody, they worked on a plan to warn the Republic of an attack. The group managed to get back in to the base, and planned to blow the base up remotely so that the Republic's "all clear" signal would no longer be transmitted from the moon, alerting them to danger. However, the remote detonator would not function, so Hevy chose to stay behind and sacrifice himself, blowing the explosives manually and alerting the Republic to General Grievous' invasion fleet. Echo and Fives were the inducted into the 501st Legion by Captain Rex, and were promoted to ARC troopers after the Battle of Kamino. Echo was injured and thought dead during a mission to rescue Even Piell from the Citadel prison when he tried and failed to stop a commando droid from destroying the team's escape shuttle, sacrificing himself, though he eventually survived.

Captured by Separatist forces led by Wat Tambor, Echo was feeding the Separatists confidential information to the droid armies. During the Battle of Anaxes, Captain Rex, Anakin Skywalker, and the clone legion the Bad Batch were sent to rescue him. After being found, Echo was seen to have multiple chords plugged into him, but was soon unplugged. Later, Echo joined Rex, the Bad Batch, and Skywalker to trick the Separatist Admiral Trench into a trap, but the warlord revealed a bomb he had planted on Anaxes, which would destroy part of the planet. With the help of Echo, Jedi Master Mace Windu deactivated the bomb. After the battle, Echo, the Bad Batch, and Rex were decorated with medals for their bravery. 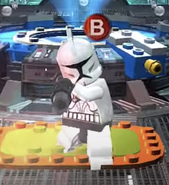