"I am built to protect those who cannot protect themselves!"
―Echo Zane

Echo Zane is a Minifigure who appears in 70594 The Lighthouse Siege. He was a Nindroid created by Dr. Julien based on Zane's blueprints.

Echo Zane bears resemblance to Zane's Titanium Ninja variant, but copper. He includes Zane's hair in copper. His head has the same print as Zane, but with a slighty different mouth and rust details. His body is made of scrap parts with a clock as his power source. His feet are also stained with rust.

When Dr. Julien was trapped in the lighthouse, he created a second Nindroid based on Zane's blueprints. However, Echo Zane did not turn out to be as advanced as the original Zane.

Echo Zane was later discovered by Jay and Nya when they hid in the lighthouse from Nadakhan's Misfortune's Crew.

In "The Way Back", Jay wished that Nadakhan's tea cup has never been found. This altered time, meaning Echo Zane was never discovered. 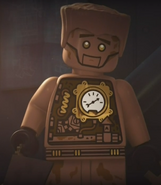 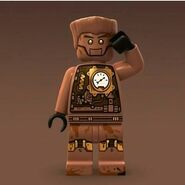 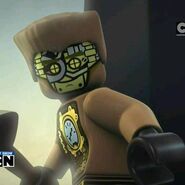 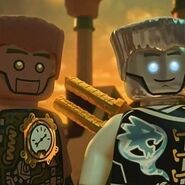