Eeth Koth is a minifigure released in 2011 from the LEGO Star Wars line. He was a Zabrak Jedi Master who participated in the Clone Wars, and he wielded a green lightsaber. At one point he was defeated and taken hostage by General Grievous in Star Wars: The Clone Wars. He is included in the set 7964 Republic Frigate. He is one of the people who are hostages in the Bounty Hunter missions in LEGO Star Wars III: The Clone Wars, located on The Resolute, located by blowing up the windows with detonators until a trapdoor opens up, revealing him.

Eeth Koth was a Zabrak Jedi Master, and member of the Jedi High Council during the final years of the Galactic Republic. Iridonian Zabrak such as Eeth Koth were renowned for their mental discipline, which allowed them to tolerate great physical suffering. This ability was born of surviving their harsh environment. Koth was born in the violent slums of Nar Shaddaa, and was deemed too old to begin Jedi training at age four.

His natural abilities were his ticket into the Jedi Order, and Koth would go on to become a leading member of the Jedi Council. Koth participated in the Battle of Geonosis, the opening battle of the Clone Wars, as part of the Geonosis strike team consisting of 212 Jedi. Koth narrowly survived a LAAT gunship crash which took the life of Tarados Gon, and was initially believed to be dead following the battle. After returning to his duties, Koth would go on to lead his men in the Battle of Korriban. A chance encounter with the General of the Separatist Droid Army, Grievous, led to his capture in the Outer Rim. However, using sign language hidden in a holotransmission sent to the Jedi Council by Grievous, Koth led the Republic Navy to his location over Saleucami, where Anakin Skywalker and Adi Gallia freed Koth from his imprisonment.

Eeth Koth without a weapon

Eeth Koth at the Toy Fair.

Back of his hair piece. 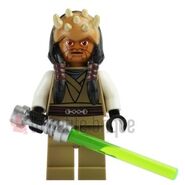 Another picture of Eeth Koth