Eglor is a Legends of Chima minifigure released in 2013.

Eglor is the only non-white Legends of Chima Eagle tribe minifigure currently released. He has dark blue for the base colour of his legs, torso, and headgear, with black arms and flame yellow hands, and he wears a silver armour piece around his neck with a blue 1x1 round tile on a stud in the center. His toes are printed with golden talon markings, his knees with silver markings, and his belt and upper legs with silver and black. Eglor's helmet is dark blue, and has silver markings on the forehead and a short flame yellow beak on the front. Three blue 'prongs' protrude from the back of his helmet, and two white wings connect to his shoulder armour piece, like with the other Eagle tribe minifigures. Eglor wields a silver spear in the set 70013 Equila's Ultra Striker, and a spiked axe weapon in 70105 Nest Jump. He also has a golden chain weapon with two Chi orbs at each end in 70007 Eglor's Twin Bike.

Eglor is a part of the Eagle faction, along with Eris, Ewar, Ewald and Equila, which is allied with the Lion faction and Gorilla faction against the Raven, Wolf, and Crocodile factions. He drives a blue Speedor.

Eglor is the Eagles' head weapons specialist, and like most Eagles, he is very analytical. While this allows Eglor to make almost anything into a weapon, he does not have enough time to use it. 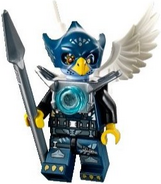 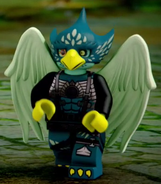 Eglor in the TV series 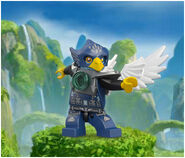 Eglor on his Speedor
Add a photo to this gallery
view · talk · edit Legends of Chima Minifigures
Retrieved from "https://brickipedia.fandom.com/wiki/Eglor?oldid=1959774"
Community content is available under CC-BY-SA unless otherwise noted.