Egon is bookish and socially awkward. In his spare time, he collects spores, molds, and fungus. He doesn't articulate his emotions well and has described himself as "always serious." His childhood may have been normal in many regards, but one strange fact is that he didn't play with toys. Egon said that his parents did not believe in toys. He was given part of a Slinky once, but he straightened it. And once, in Ghostbusters II, Egon flatly informed Mayor Lenny's porter that the Proton Pack was not a toy. Despite Janine Melnitz' subtle hints that she was attracted to him, he seemed to ignore her romantic advances, kept quiet, and their relationship remained platonic. Egon doesn't handle stressful situations well, as evidenced by his statement that he was "...terrified beyond the capacity for rational thought," when facing the Stay Puft Marshmallow Man. Egon is not without a sense of humor and has been known to be sly. Such as after the Ghostbuster's first case, when he holds up his fingers to show the amount of the bill to the Sedgewick Hotel, and during the court trial in 1989, when he chimes in from "Doe, Ray, Egon!" and then grins mischievously.

Occasionally Egon is given to understatement; he initially only states that crossing the streams would be "bad".

Egon has a very dry sense of humor, once jokingly stating that most women would be "more interested in his epididymis," rather than his intellect. He is not immune to anger, as under duress he has been shown to swear twice in the first movie. He even lunged at Walter Peck in anger when Peck ordered them arrested for the disruption regarding the shutdown of the containment grid, despite the fact Peck himself was entirely responsible. He will also on occasion smirk and give a wisecrack; such as during their encounter with the Opera Diva ghost in the Ghostbusters: The Video Game Egon says "The fat lady's singing!" And while exploring Central Park's Cult Cemetery, Peter says "This isn't the Central Park I'm used to." to which Egon replies, "You still have your wallet?" Generally speaking though, Egon remains largely pragmatic and straight-to-the-point when it comes to his demeanor. Even though he has a tight and awkward personality, he is still the brains of the team.

Egon puts few restraints on the scope of his paranormal research. This is evident in Ghostbusters II, as he conducts experiments in his lab in which he deliberately incites couples to argue. When the mood slime is being tested, Egon sleeps with it in order to check its response to nurturing behavior. Science tends to take precedence over people's well being, as Egon is rather detached in his instructions regarding psychological experiments with couples and children in the second movie.

Egon appears in LEGO Legacy: Heroes Unboxed as a support unit with the abilities Perfect Design, Sticky Science, No "I" in Egon, The Best Defense is SCIENCE!, and the Ultimate ability Cross the Streams.

His backside of his head 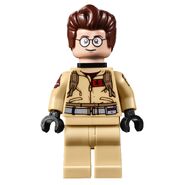 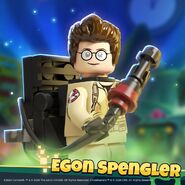