Brickipedia
Register
Don't have an account?
Sign In
Advertisement
in: Class 2 articles, Minifigures (theme), Minifigures introduced in 2011,
and 4 more
English

"Asp me no questions, and I shall tell you no lies."
―Egyptian Queen

The Egyptian Queen, also known as Cleopatra,[1][2] is a Collectable Minifigure released in 2011 as one of the sixteen minifigures from 8805 Minifigures Series 5. She features a green snake as an accessory and a new black hair piece with a headdress printed on it, and her eyes are accented with blue eye liner. She also wears a sloped piece in place of normal minifigure legs to simulate a dress. She is voiced by Emily Nordwind in The LEGO Movie 2: The Second Part.

The Egyptian Queen has a white dress with a horizontal gold stripe at the bottom and several lines going downwards. At the top of her dress is are two lines going outwards and then two more at the ends of those going back inwards and joining together. This shape is outlined in light blue squares and gold in the middle with a light blue jewel near the end. Her torso is white, and she has yellow arms and hands. She has a golden belt with a light blue circular gem in the middle and wing markings coming out from it. Some more light blue and gold printings show the start of the shape at the top of the dress. At her sides, the Egyptian Queen has black half-oval printings to show her waist being thinner than normal minifigures. The Egyptian Queen has a golden plate neckless with a picture of a bird on it with its wings outstretched. The Egyptian Queen's head is yellow with black eyes, white pupils, and long eyelashes. Above the eyelashes is some blue printing and then two black eyebrows. The Egyptian Queen mouth has a black smile with orange lip printings on it. She has a long black hair piece and markings above her forehead light those on her belt. The Egyptian Queen comes with a green snake as her only accessory.

In the LEGO Movie Video game, she and William Shakespeare appeared to help Vitruvius to fight against Lord Business in the Prologue. 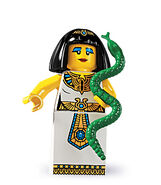 A CG image of the Egyptian Queen 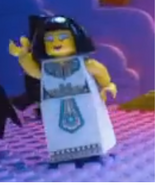 Cleopatra as seen in The LEGO Movie. 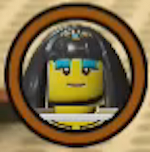 Cleopatra in The LEGO Movie Videogame

Cleopatra in The LEGO Movie 2 Videogame

In The LEGO Movie 2 Videogame.

Deutsch Français
Community content is available under CC-BY-SA unless otherwise noted.
... more about "Egyptian Queen"
RDF feed
Accessories
Snake (Green)
Headdress
Dress +
Appearances
8805 Minifigures Series 5
The LEGO Movie +
ArticleRating
2 +
Image
Lego-cleopatra.jpg +
InfoboxTemplate
Minifigure +
ShopDescription
The Egyptian Queen is used to the finer th … The Egyptian Queen is used to the finer things in life, but don’t think for a moment that it’s made her soft! She may have a golden throne, banquets five times a day and legions of loyal servants to obey her every command, but she also knows all about tax codes, crop rotation and pyramid construction regulations, not to mention the ancient game of politics.</br></br>The Egyptian Queen loves to disguise herself as a commoner and listen to what her subjects are saying about her. Of course, since everybody knows what she looks like (she’s on all the coins and statues, after all), they’re always careful to say only nice things. It isn’t too hard, since for an all-powerful sovereign, she’s really not too bad!erful sovereign, she’s really not too bad! +
Theme
Minifigures
Series 5 +
Title
Egyptian Queen +
Years
2011 +
Advertisement