Electro, also known as Maxwell Dillion, was an enemy of Spider-Man that he fought numerous times before he joined S.H.I.E.L.D.

When Spider-Man fought Electro in Times Square, he tazered him against a large screen, which made Electro disappear. He later resurfaced and shut down everything electricity based in New York City holding it ransom, hiding in the screens as a blue man (Electro V 2.0). Spider-Man and his team (Nova, Iron Fist, Power Man, and White Tiger) drew Electro out by forcing him to spread himself too thin due to trying take over technology and the Daily Bugle Communications' global broadcast tower, returning him to normal form and defeating him.

He was later broken out of the Raft by Doc Ock to be part of the new Sinister Six (with Beetle being replaced by Scorpion) and was given an armour made from stolen Oscorp technology, like the rest of the team, to enhance his abilities, but was easily defeated by the Green Goblin. 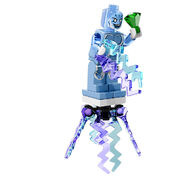 Add a photo to this gallery
Retrieved from "https://brickipedia.fandom.com/wiki/Electro?oldid=1567084"
Community content is available under CC-BY-SA unless otherwise noted.