Elektra Natchios was a troubled girl born into a wealthy Greek Family and came to New York City as a child due to her father being the Greek Ambassador for the U.S.A. Due to Elektra's mother having been killed by her father's enemies when she was young, Elektra's father funded for her to get an education in martial-arts to defend herself. Elektra then went to Columbia Law School where she was the girlfriend of Matt Murdock but she left after her father was killed by assassins.

Elektra left to train with the secret martial-arts organization known as The Chaste under the guidance of a rigid and cold, blind ninja named Stick who had Elektra deposed from the Chaste for being too emotional over her father's death. Following this, Elektra joined the Chaste's arch-rival, the evil ninja organization known as The Hand which saw great potential in the young woman.

Elektra eventually returned to New York in-order to further the Hand's criminal reach and so she became the chief-assassin to Wilson Fisk, New York's Kingpin of Crime and replaced his former chief-assassin Bullseye. It was also here that Elektra reunited with Matt who was now the superhero vigilante Daredevil which caused them to have a complicated on and off relationship. Ultimately Elektra was killed with her own blades by a deranged Bullseye as a way to get at Daredevil but the Hand revived Elektra using their dark-magic. 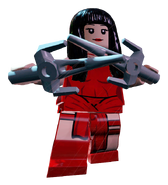