Elendil is a character that appears in LEGO The Lord of the Rings: The Video Game.

Elendil was the King of Men and the father of Isildur and Anarion, Kings of Gondor and Arnor. During the Second Age of Middle Earth, Elendil formed an alliance of elves and men with Gil-galad to fight Sauron who wanted to rule all of Middle-earth. So the alliance set off to Mordor to fight Sauron's dark forces. The alliance had almost won, when Sauron himself joined the battle and killed many soldiers, before attacking Elendil and slamming him against a stone wall. He was instantly killed. Sauron then went for Isildur, but the king picked up his broken sword and sliced off Sauron's fingers including the one that had the One Ring on it, defeating him.

Elendil fighting with his sword 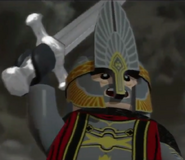 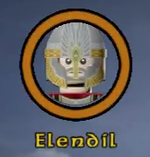