Elizabeth Swann is a Pirates of the Caribbean minifigure that has been released in the 2011 set, 4181 Isla De La Muerta.

Just one version of Elizabeth Swann has been released. She has long flowing hair, the same as Syrena, but in medium dark flesh. She has a double sided head, one with a smile, the other frightened. She wears a dark red dress, with another white one underneath. She also has the 882nd Aztec piece of gold around her neck.

Elizabeth Swann crossed to port Royal from England as a girl with her father, Weatherby Swann. During the voyage, they came across a ship attacked by the Black Pearl. A boy, William Turner Jr. was rescued from the wreckage. Elizabeth stole the piece of Aztec gold around his neck to prevent him from being accused of piracy.

Years later, as a young woman, Elizabeth wore a corset and the Aztec medallion she took from Will for Norrington's promotion to commodore. She fell from the fort into the bay after he proposed marriage because her corset was too tight. The Aztec medallion emitted a pulse through the water, summoning the Black Pearl. She was rescued by Jack Sparrow. When the Black Pearl attacked that night, she arranged parley with Pintel and Ragetti. Hector Barbossa, believing she was Bootstrap Bill's descendant, did not return her to shore and kept the medallion. While on board, Barbossa revealed the crew's "undead" situation. She was rescued by Will Turner from Isla De Muerta after Barbossa found she was not the descendant. Will later threatened to send himself to Davy Jones' Locker if she was not set free. Barbossa then had Elizabeth and Jack walk the plank, and marooned them on Rumrunner's Isle. They were rescued by Norrington and the royal navy. She convinced Norrington to go to Isla De Muerta by accepting his proposal, but later revealed to Norrington that her heart lies with Will.

Elizabeth and Will were arrested by Cutler Beckett right before their wedding for helping Jack escape previously. Her father freed her from her cell after Will was manipulated by Beckett to go obtain Jack's compass. Weatherby was caught and arrested by Mr. Mercer. Elizabeth had escaped, and had Beckett sign and seal letters of marque to free Will by holding a pistol at his head. She then escaped Port Royal by stowaway aboard the Edinburgh Trader. By using the ship's rigging, she puppeteered her dress and set fire to oil on the deck revealing "Tortuga". She arrived in the midst of a bar brawl started by Norrington. She joined Jack's crew and Jack uses her, by means of revealing Will being presganged into service aboard the Flying Dutchman and using his compass to point the way to the Dead Man's Chest. Will arrived after they discover the chest. After Jack, Will, and Norrington dueled for the key, she tried to stop Pintel and Ragetti from stealing the chest, only to be attacked by the crew of the Dutchman. After the Kraken attacked the Black Pearl, she seduced, passionately kissed, and then handcuffed Jack to the mast. Her marriage with Will was strained.

Elizabeth and Barbossa arranged a deal with pirate lord Sao Feng. The deal went awry when the East India Trading Company marines attacked. Will managed to secure a crew however and they headed out for World's End. Elizabeth and Will had not been speaking for some time. In Davy Jones' Locker, Jack revealed that Elizabeth had sent him to his death. While aboard the Pearl in the Locker, boats with dead people passed by, and among them was her father, having being murdered by Beckett for his knowledge of Davy Jones' Heart. Upon return to the real world, they were betrayed by Sao Feng, who was in turn betrayed by Cutler Beckett. In order to free the crew, she agreed to go with Sao Feng. While aboard his ship, he tried to seduce her, believing her to be the goddess Calypso. The Empress was then attacked by the Flying Dutchman, and a dying Sao Feng passed on his pirate lordship to her and his piece of eight to make her captain. Norrington, now admiral anboard the Dutchman, initially imprisoned the crew but freed them after he learned from Elizabeth of her father's death by Beckett. He was killed whilst freeing Elizabeth. At Shipwreck Cove, she was elected Pirate King after Jack broke a stalemate vote in her favour. She then traded Jack to Beckett in exchange for Will. After Calypso abandoned them, she inspired the brethren to attack the East India Trading Company. She was married to Will during the ensuing battle of Calypso's Maelstrom by Barbossa. She later had her one day with Will before he sets out on his duty to ferry souls to the afterlife.

Ten years later she awaited Will's return with her son Henry Turner, with Will's one day stretched to a lifetime. A long time later, around thirty years, Henry managed to break Will's curse, and Elizabeth embraced her husband for the first time in years, kissing her. 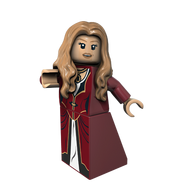 The minifigure with alternate expression.

Elizabeth and Jack Sparrow in LEGO Pirates of the Caribbean: The Video Game

Elizabeth Swann in LEGO Pirates of the Caribbean: The Video Game

Elizabeth Swann as the Pirate Lord of Singapore.

Elizabeth at Port Royal
Add a photo to this gallery
Retrieved from "https://brickipedia.fandom.com/wiki/Elizabeth_Swann?oldid=1882664"
Community content is available under CC-BY-SA unless otherwise noted.