"I just updated your scanning software! Use it to have a look around for anyone who might be a robber!"
―Ellie Phillips to Chase McCain

She has a heart of gold but it's hard to do her job sometimes without being bossy, such as when she needs to keep Chase focused on his missions. 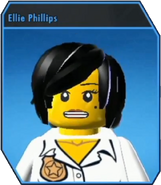 On the WiiU gamepad

Ellie Phillips with Police Communicator
Add a photo to this gallery

Retrieved from "https://brickipedia.fandom.com/wiki/Ellie_Phillips?oldid=1910627"
Community content is available under CC-BY-SA unless otherwise noted.