Ellie is a paleobotanist and in a relationship with Dr. Grant. She has blond hair and is very energetic. During the events of the first film she was invited by John Hammond to Jurassic Park.

After the events of Jurassic Park, Ellie ended her relationship with Alan Grant and began a relationship with Mark Degler, an employee of the U.S. State Department who she subsequently married. They had two children whom they lived with in Washington DC. She had become a children's writer. Ellie remained very loyal to Alan, telling him that he was still the best in his field and that he could call her about anything at any time. In Jurassic Park III, her son Charlie Degler had dragged the phone Alan was calling on to get to his mother who was told by Alan that he and the search party are lost on Site B at the river. Mark's connection to the State Department helped them in getting the US Marine Corps to rescue them from the island. 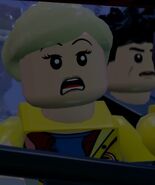