Embo is a Star Wars minifigure based on the bounty hunter character of the same name, and was first released in 2011, and later in 2012.

Embo's hat has printed markings on it, reflecting its appearance in the Star Wars: Clone Wars universe. The headpiece has detail on both sides, and its base colour is sand green. Yellow eyes and a mask, used in the Star Wars universe as a breathing apparatus, are printed on the front of the head. The torso is double-sided, with an ammo strap along it and a badge on the upper right hand corner. The legs are also detailed with a unique design including a belt printed at the top of the hip joint of the leg.

Embo was a Kyuzo Bounty Hunter during the Clone Wars. At one point, he was a part of Sugi's crew, and was instrumental in helping defeat a band of pirates threatening villagers on Felucia. He later appeared in an episode in Season 4 of The Clone Wars, in the episode "The Box", of which he is one of the Bounty Hunters chosen to compete in the course. 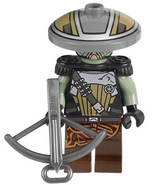 Embo with his bowcaster.

Back and front views of Embo with his hat off.