Brickipedia
Register
Don't have an account?
Sign In
Advertisement
in: Class 3 articles, Minifigures introduced in 2014, The LEGO Movie Minifigures,
and 5 more
English

"I am a Master Builder!"
―Emmet, announcing his newfound self-identity. [src]

Emmet Brickowski is a Minifigure released in 2014, he is the main protagonist of The LEGO Movie and The LEGO Movie 2: The Second Part. He appears in sets based on the movie and the second movie. He is voiced by Chris Pratt in the films and LEGO Dimensions and by Keith Ferguson in the video game adaptions.

Emmet has a total of twelve physical variants.

Emmet wears an orange and blue construction vest and pants lined with silver on the legs, back, and front. There are two pockets on his vest, one of them containing a blue pen. On his left leg is an ID badge with a small bio (portrayed by three black bars), an image of Emmet, and his name written in white above the bio. His hair is medium brown with ripples molded into it and a little bit of hair sticking out of the back. To fit the Piece of Resistance on Emmet's back, a neck bracket is placed around his neck and the Piece is attached via a stud hole on the back.

The first version of this appears with a different head. It has a smirk and it's alternate face is an screaming expression.

Another version of this appears with a different head. It has a smile showing teeth and it's alternate face is an nervous expression.

There is also one variant exclusive to The LEGO Movie Exclusive Set which is his regular variant (the one with the lopsided smile), but without the Piece of Resistance. The reason for this is so he can sit in his theater seat included in the set.

The other head has an open-mouth smile on one side, and an angry face on the other. This variant does not include the Piece of Resistance.

This variant is the same as his Regular Variant, but it has a Red Hard Hat with hair underneath. Emmet's face is an open-smile mouth, and the alternate face is him with an excited expression. This can be found in 71004 The LEGO Movie Series.

Emmet's poncho variant includes his regular outfit, a Blue and Orange poncho on his body. His face is yellow with a mustache and an open-mouth grin. He also wears a fedora, the same one as Indiana Jones and The Joker. He has two inaccuracies compared to his movie version: there is no visible hair under his hat and he doesn't have the Piece of Resistance. In early promotional shots for the minifigure, he had a black moustache.

In his pajamas, Emmet has Light Blue and White Pajamas, and his old headpiece. His face is an open-mouth smile showing him winking, and the alternate expression is Emmet yawning.

In his robot disguise, Emmet has tinfoil covering his hands, feet, face, and the Piece of Resistance. His legs have the same print as most Emmet variants, except with the tinfoil printing on the feet. The torso is the same as well, except that it is a new combination with light gray hands. The Piece of Resistance is now in a new color of pearl gray. Emmet's head piece has holes cut in the tinfoil for his eyes and mouth and crinkle printing on the back and front of the head piece. He also reuses the same hair/hat combination from Hard Hat Emmet.

5 years later after Bricksburg was destroyed by the LEGO Duplo Aliens on Taco Tuesday, Emmet's Construction clothes were slightly ripped up.

Emmet has a total of fifteen video game variants.

His Regular, Hard Hat, Cowboy, Robot Disguise, and Pajama variants are included. Also, the outfits from Series 1 that he wore in the movie are included.

Emmet's new versions are Trash Can, which has a Trash Can on his head, Wheel Head, which has a wheel on his head, and Shower, which is a variant with bubbles circling him. Also, in the final two levels and in an Instruction Build, his Construct-o-Mech is playable.

Emmet's abilities are Instruction Build, using a drill, and fixing objects with a wrench.

All of Emmet's physical and video game variants appear in The LEGO Movie.

After the battle, it is revealed by The LEGO Movie: The Essential Guide that Emmet now spends time with his newfound friends, along with Gail, Wally, Frank, Sherry, Surfer Dave, and all of his Bricksburg friends. This may mean that his Bricksburg friends had finally started to notice he is around.

"Good morning apartment! Good morning ceiling, good morning doorway, good morning floor! Ready to start the day!"
―Emmet
"Introducing the double-decker couch. So everyone can watch TV together and be buddies!"
―Emmet
"Well I'm dark and brooding too -- guys, look! A rainbow!"
―Emmet
"But there's no signs anywhere! How do you know what not to do?"
―Emmet to Unikity
"I think I heard a whoosh."
―Emmet
"Hello! I'm Emmet... oh and this is the Piece of Resistance."
―Emmet to the Master Builders.
"You don't have to be the bad guy. You are the most talented, most interesting, and most extraordinary person in the universe. And you are capable of amazing things. Because you are the Special. And so am I. And so is everyone. The prophecy is made up, but it's also true. It's about all of us. Right now, it's about you, and you still can change everything."
―Emmet to Lord Business 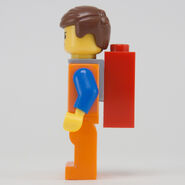 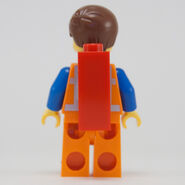 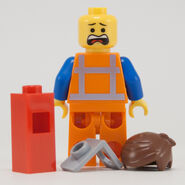 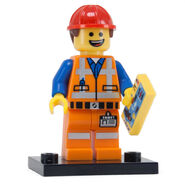 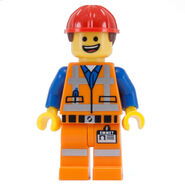 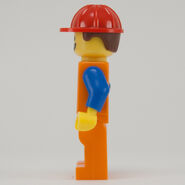 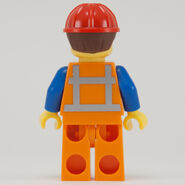 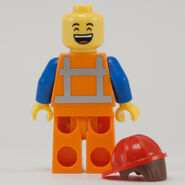 Emmet's cameo in The Simpsons episode "Brick Like Me". 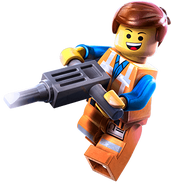 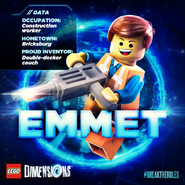 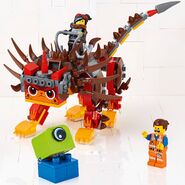 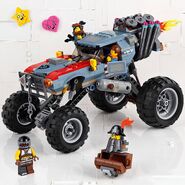 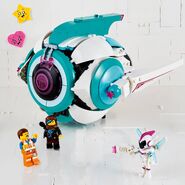 Emmet with Wyldstyle and Vitruvius 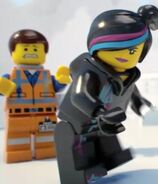 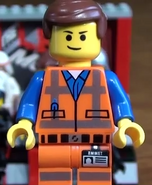 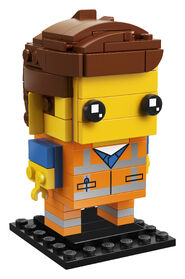 Emmet - Not looking back at the awesome explosion! 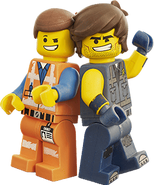 Emmet and the Wizard of Oz crew.

Emmet with everyone in the Double Decker Contest promotion. 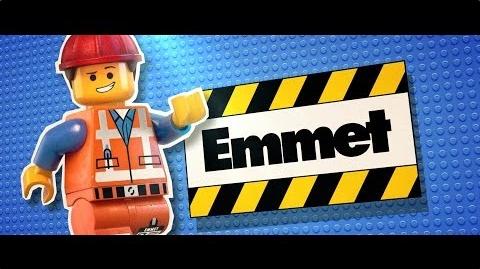