Enkrypted is the third episode of the sixth season of LEGO Ninjago: Masters of Spinjitzu and the fifty-seventh overall in the series.

Falsely imprisoned, the Ninja are at their lowest point, but they find an unlikely friend in an old enemy.

The Ninja are in Kryptarium Prison, locked in shackles made of Vengestone to prevent them from using their elements. They immediately attract the attention of the enemies they imprisoned and the Mechanic, a man with a cybernetic arm and former employee of Master Chen, who wants spare parts from Zane.

They have lunch and Captain Soto overhears them talking about a Djinn, especially Nadakhan. He tells them how do defeat them using the venom of Tiger Widow on Tiger Widow Island, however, the Ninja have a fight with the other inmates until the guards break them up before Soto has a chance to tell them the location of The Tiger Widow Island. Soon, the Mechanic and some other inmates come to the Ninja. Cole calls him a fourth tier bad guy, which starts a food fight.

After rounding up his crew, Nadakhan and the Sky Pirates had a party until they decide to visit Djinjago, however, the place is breaking up since the Cursed Realm, its sister counterpart, has become destroyed. Nadakhan's father gives him the Djinn Blade, telling him that it can trap one's soul. He also asks Nadakhan to avenge Djinnjago. Nadakhan leaves his home world with his pirate crew.

Meanwhile, the Ninja are sitting together in a hole in Kryptarium, put there by Warden Noble for starting a tussle during the lunchtime. Lloyd uses a fork to untie himself and frees his friends with his powers. As their elemental powers are back, they manage to escape, taking Captain Soto with them. After they got out of the prison, Soto tells them that the map with the location of the Tiger Widow Island is on a lantern, but the lantern is situated on board of Nadakhan's ship, Misfortune's Keep. Soto also states that Nya is a spitting image of someone he knows, but does not tell who.

In the meantime, the pirates keep repairing the ship. After Clancee brings a newspaper and coconuts to Nadakhan, the latter sees a picture of Nya on the front page of the newspaper and compares it with one he has of Dilara. Flintlocke tells Nadakhan that the restorations are going just as planned and that Misfortune's Keep will fly soon. 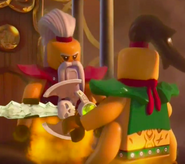