Erin Gilbert is a Ghostbusters minifigure released in 2016. She first appeared in 75828 Ghostbusters Ecto-1 and Ecto-2 . She later made a non physical appearance in LEGO Dimensions as a character that Abby Yates can transform into.

She has the standard Ghostbusters jumpsuit that all the new Ghostbusters have, with a standard proton pack on her back. She uses Chell's hairpiece, but in brown.

Erin Gilbert was a professor studying Paranormology(the study of ghosts) with her friend Abby Yates. When they published a book on the subject, however, people deemed them crazy. Erin tried to distance herself, not working with Abby anymore and forcing her to take down the book. Years later, Abby republished the book, this time with help from engineer Jillian Holtzmann. Erin returned to demand them to take down the book but quickly sided with them after a chance ghost encounter. They set out to find the source of the ghost disturbances, recruiting MTA worker Patty Tolan and receptionist Kevin along the way. Eventually, they found the culprit, an occultist named Rowan North, and stopped him, bringing peace to New York City once again and being publicly supported and funded by the mayor. 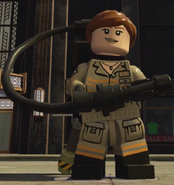