This article is about the figure. For the constructable, Ultrabuild action figure based on , see 70201 Eris.

"I think this flight can use some altitude"
―Eris

Eris has a torso and belt with light blue skin, like the headpiece under the eagle ‘helmet’; white arms and legs; and yellow hands. On her ‘toes’, she has markings like those of eagle talons. She has golden printing on her knees, and also on her belt. Her 'helmet', white in base colour, has a yellow beak, eyeholes, and a golden tiara with a blue stone in the middle; three 'prongs' rise from the back. Her eyes, revealed through the eyeholes, are yellow. Over her torso, she wears a golden shoulder armour piece with a transparent light blue flat-stud piece in the middle. White eagle wings connect to the back. Her torso wears golden top to cover her chest and expose her navel. However, in the set 70009 Worriz's Combat Lair, she wears a new 2013 armor piece which is also seen on Lagravis in set 70010 The Lion CHI Temple.

She is an eagle princess. Though strategic and focused like most other eagles, Eris is also capable of thinking quickly. Eris is kind and a loyal friend. She is a good storyteller and loves to tell jokes, even though her friends do not usually find them funny.

Eris is best friends with Laval and prefers his company to that of most other eagles.

In battle, she wields Eglaxxor, a battle axe-like weapon with a brown shaft, a golden head, and flat blue studs on either side. Though not particularly strong, she makes up for this handicap with intelligence, strategy, and surprises. Since she is capable of flight, she can dominates her opponents by attacking from the sky.

Eris is a rather timid young eagle. She doesn't really prefer face-to-face battles, but instead she likes to assists her friends from the sky in her Interceptor.

As a best friend to Laval, Eris acts as the mature one. Always advising Laval about the right things to do and what best to avoid. Her timid nature usually commented by Laval that Eris should be more 'lighten up' and to not spoil the fun.

Eris is a bit naive. When Rogon keeps staring at her with 'weird faces', she never noticed that Rogon actually likes her, that is, until Laval saw Rogon's carved slab with a picture of him and Eris inside a heart. Laval explained to her that Rogon like her, Eris was shocked by the proclamation, as she never thought that Rogon could ever like her.

In the episode Chima Falls, she breaks up with Rogon because he turned against Laval because of Cragger's influence and free rocks. However, in the next episode, For Chima, Rogon abandons the rest of his tribe to help Eris in the final battle. In Season 2, they continue to show affection for each other.

In A Tangled Web she doesn't enjoy the super intelligent Rogon. She becomes jealous when she hears that Rinona is Rogon's "special friend", laughs and denies being jealous. When Rogon is his usual old self she's happier to know he's his old self and Rinona says she's happy for Rogon as well. Later in the season Eris is informed that Rinona was Rogon's cousin.

In The Eagle and The Bear she wonders why the Eagle Legend is flying around and discovers that the dark tribes have put the Eagle's eggs on a see-saw trap along with the Bear Legend. When she describes the dilemma Razar scares her by saying that if they remove the Eggs the bear legend will go smash and removing the bear will make the eggs go smash.

In Fire Dreaming she has dreams and day dreams that she was on fire. She tells this to others, but they claim that she was running and screaming. Near the end of the episode she asks her friends what Chima was like before Cavora and Chi. Laval claims that if something then was important they would have been told about it.

In Attack of the Ice Clan she has a dream/vision about her wings, Laval and Cragger's vehicles and Mount Cavora going on fire.

In The Call of Cavora, she has a vision of Fluminox. As she discovers the legend of the Phoenixes, she is desperate to meet him. 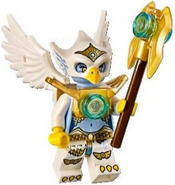 Eris without her armor

Eris in the Eagle Interceptor 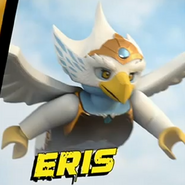 Eris in Legends of Chima

An animated Eris on a poster 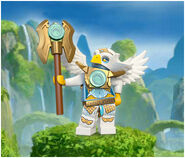 Eris' 2014 variant in Legends of Chima

Eris on her series 1 Speedor

A hologram of Eris in Nexo Knights


Appearances
70003 Eris' Eagle Interceptor
[[700 … 70003 Eris' Eagle Interceptor<br>70009 Worriz's Combat Lair<br>70114 Sky Joust<br>70124 Eagle Legend Beast<br>70128 Braptor's Wing Striker<br>70133 Spinlyn's Cavern<br>70142 Eris Fire Eagle Flyer<br>71232 Legends of Chima Eris Fun Pack71232 Legends of Chima Eris Fun Pack +
ArticleRating
2 +
Image
Eris2015.png +
Img1
Eris-1.jpg +
Img2
ErisBigGoldArmor.png +
Img3
Loc058.jpg +
Img4
Loc071.jpg +
Img5
Eriss.jpg +
Img6
Eris2015.png +
Img7
20945712414_70c4fffd82_o.jpg +
InfoboxTemplate
Minifigure +
ShopDescription
Eris
While many Eagle Tribe memb … Eris<br>While many Eagle Tribe members can be a bit “airheaded,” Eris is always extremely focused and quick-witted, which is probably why she spends more time with the earth-bound creatures (like Laval) than those who live in the clouds. She loves adventures and puzzles, and can spin a yarn like no other creature. She is also an extremely strategic fighter. What she lacks in strength she makes up for with smarts. You have to fight Eris with both your body AND your mind because she always has a trick or two up her wings. She’s never mean-spirited... unless provoked. Typically, she’s the first to lend a hand, and the last to leave a friend in need. You can always count on Eris. Just don’t let her corner you and tell you jokes – a lot of them aren't as funny as she thinks they are.em aren't as funny as she thinks they are. +
Theme
Legends of Chima +
Title
Eris +
Txt1
Gold Armour +
Txt2
Big Gold Armour +
Txt3
Outlands +
Txt4
Outlands (Gold Armor) +
Txt5
Fire +
Txt6
Fire (Fire Wing Harness) +
Txt7
Fire (2015) +
Variations
Original
2014 Armour
Outlands
Fire
Fire wing +