Eruptorr is a 2010 Power Miners Lava Monster. It is similar in appearance to the 2009 large throwing Rock Monsters. Eruptorr has transparent orange legs and a black body. It is the leader of the Lava Monsters. Its name is a version of "Erupter", as in "One that erupts", as he seems to have lava coming out of his mouth and spurting from his back. According to a LEGO magazine, he is the most powerful of the monsters in this theme.

Eruptorr has transparent orange legs that do not move. The rest of his body is made of black rock, with orange lava in spots. He has a large black head that does not move, with trans. orange teeth and printed lava dripping from the mouth. His arms are separate pieces from the body and can both move freely. They are transparent orange with black rocky printing. There is orange fire atop his head. A lever on his back controls one arm. Pushing this lever makes his arm swing so it can throw or hit things or break soft placed lego bricks. 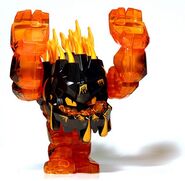 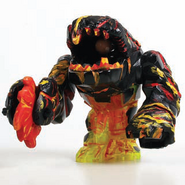 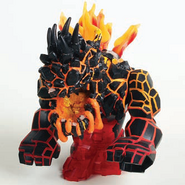 Compared to other monsters

Rock Monsters and Lava Monsters
Add a photo to this gallery

Retrieved from "https://brickipedia.fandom.com/wiki/Eruptorr?oldid=1965815"
Community content is available under CC-BY-SA unless otherwise noted.