Brickipedia
Register
Don't have an account?
Sign In
Advertisement
in: Class 3 articles, Minifigures introduced in 2013, Minifigures (theme),
and 2 more
English

Evil Mech is a Minifigures Series 11 minifigure released on September 1, 2013.

The Evil Mech has the Battle Mech's Mini Mech Armor and Mini Mech Helmet pieces, but recolored in black and silver. It has black legs, arms, and torso; dark stone grey hands and hips; and a bright yellowish green head. Its arms, hip, and legs feature lime green armor printing. Its torso features printing resembling a mechanized version of the Blacktron Astronaut spacesuit, with the yellow triangular Blacktron logo printed on its armor. Its head is printed with a red cross-hair target similar to Techdroid I, as well as skull-like jaws. It is equipped with a gun which is made up of a megaphone brick and a transparent fluorescent green nose cone brick.

The Evil Mech is a unique robot, built within a black hole and programmed by Blacktron's top cyber-slicer. Due to its nano-coating, it is capable of slipping through force fields and scanners while remaining undetected, allowing it to complete Blacktron's espionage missions. 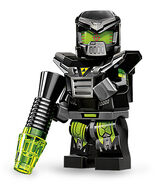