This article is about the villain from the 2007 Castle theme. For other evil wizards, see Evil Wizard (Disambiguation).

The Evil Wizard's legs are red and black and have many markings. These include a tooth and a crystal. His body his red with black hands and has markings showing his robes. He has a black ragged cloak and a large collar type thing and a grey beard and a face with one red eye. On his head he has a wizard hat with a skull halfway up.

Mallock the Malign is the ruler of the Barren Wastelands. He lives in the Skeleton Tower, and is able to use sorcery to bring people back to life as his undead servants. He uses this ability to create his Skeleton Warrior army. He also appears to be controlling dragons with it. He later makes a deal with the Troll King and the Troll Warriors and uses them alongside his skeletons. He is shown to be capable of imprisoning the Crown Princess. The Crown King is his arch-enemy, but he prefers to let his underlings fight the King's army, as opposed to him doing it.

In LEGO Battles, the Wizard's story revolves around his beloved Sorceress who has died. His goal is to collect three Crystal Lighting Bolts to complete the staff his skeleton gave him and to revive his love once again. 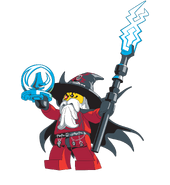 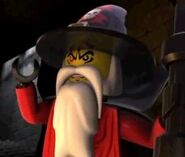 Mallock the Malign in The Adventures of Clutch Powers

"Ha ha ha ha! Ris … The Evil Wizard</br></br>"Ha ha ha ha! Rise, my skeletal legions! Obey my commands and conquer the kingdom!"</br></br>The Evil Wizard rules the barren wasteland to the East from the top of his Skeleton Tower. His wicked goal is to conquer the other kingdoms and rule them all with his magic. The dark sorcery of his lightning staff lets him create Evil Skeletons and control powerful dragons, and his crystal ball lets him spy on his enemies wherever they are. Beware his evil eye!es wherever they are. Beware his evil eye! +, Evil Wizard


The Evil Wizard lives in Skelton[sic] Tower. He is also ruler of an army of skeletons who help him to defend his castle. +  and This master of the dark arts commands an army of skeletal pawns. They are the closest thing he's ever had to a friend... which is not very close at all. +
Theme
Castle (2007) +
Title
Evil Wizard +
Years
2007 +
Advertisement