Ewald is a Legends of Chima minifigure released in 2013.

Ewald has a piece fitted over his light blue head with eagle-shape features for a more stylized look. The helmet is golden with ridges on the sides that resemble feathers and three peaks in the back. A yellow beak is on the front and there are blue rings around the eye holes. Most of the face underneath is covered, but it is light blue with a yellow beak (which is covered by the helmet) and eyes which are sunken back in his head. There are various dark blue feathers around Ewald's head.

Ewald wears a blue robe with golden embroidery around an open chest and in helixes around the robe. In the center is a darker blue piece which runs from a Chi hole hanging off of the chest to a belt around the waist. It continues past the belt and onto a slope used for the lower part through to the end. The slope is also blue with the same golden helix pattern. On the bottom are golden ridges. Ewald's arms are white and hands are yellow.

A golden chest plate covers up a considerable amount of Ewald's torso. It spreads upwards at the shoulders and sticks out at the side of the front. Most of the front is flat, but a stud is placed there. On the back of the armour, two white clips are placed which hold curved, feathered wings.

Ewald is the head of the eagles' ruling council. He is circumspect with planning both big and small things and toning them to perfection, which keeps him from finishing anything. He is Eris' father. 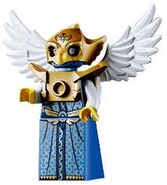 A computer generated image of Ewald