Ewar is a Legends of Chima minifigure released in 2013.

Ewar has a torso and belt with light blue skin, like the head-piece under the eagle 'helmet'; white arms and legs; and hands of flame yellow. On his 'toes', Ewar has markings like those of eagle talons. He has golden printing on her knees, and also on his belt. His 'helmet', white in base colour, has a flame yellow beak, eye holes, and three 'prongs' rise from the back. His eyes, are revealed through the eye holes, their red and white. Over his torso, Ewar wears a golden shoulder armour piece with a transparent light blue flat-stud piece in the middle. White eagle wings connect to the back. His torso is light blue and he has muscular printing on his stomach.

Ewar tries to protect CHI from Razar and his Chi Raider in set 70012. He also rides an Acro-Fighter in set 30250. He was also there to protect The Eagles' tribal villiage in the episode "Attack on Eagle Spire". 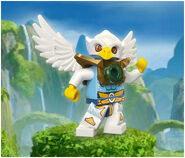 Ewar in the t.v show. He has a slight androgynous appearance.
Add a photo to this gallery
view · talk · edit Legends of Chima Minifigures