The Extremis Soldier is a minifigure released in 2013 in the Marvel Super Heroes theme.

The Extremis Soldier has dark brown hair. His head is glow-in-the-dark and is double sided, one side depicting a serious expression and the other with an angry expression. The first side has black eyes and light grey cheekbones with a serious expression, while the second has red eyes with red veins and cheekbones. The torso and arms are dark stone grey with black hands, hips and legs. The torso is printed with the muscles cut on the shirt that has a zipper, the collar, stitch lines near the arms, and red lines depicting designs all over the shirt. He has back printing depicting the back of the shirt, the muscles cut on his back, the red lines, the collar and arm stitches from the front.

The Extremis Soldier was a henchmen of Aldrich Killian, and had been injected with the Extremis formula. This formula granted him incredible regeneration properties, as well as the ability to heat his body to a molten-like form. He helped destroy Tony Stark's Malibu Mansion, under the direction of Savin, Killian's right hand. 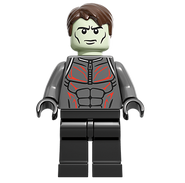 A front view with the alternate face