Brickipedia
Register
Don't have an account?
Sign In
Advertisement
in: Class 4 articles, Ninjago Minifigures, Minifigures introduced in 2015,
and 2 more
English

Eyezor (or Silver Eye) is a Ninjago minifigure released in 2015. He's one of the Anacondrai Cultists and Chen's lead thug. 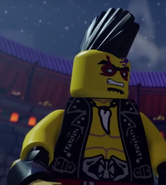