"I'm not afraid."
―Ezra Bridger (Path of the Jedi)

Ezra Bridger is a minifigure released in 2014.

Ezra Bridger was a male rebel from the planet Lothal and the Padawan of Kanan Jarrus. Bridger, who for years was unknowingly Force-sensitive, grew up as an orphan and con artist on Lothal during the reign of the Galactic Empire before meeting Jarrus and his rebel crew, who operated aboard the Ghost.

After getting caught up with the rebels during a weapons heist in Capital City and freeing Wookiee slaves, Bridger joined the rebel crew and began training as a Jedi under Jarrus' direction. Bridger and the crew undertook many missions together in an effort to defeat the Empire. After his master's death, Ezra boldly faced Grand Admiral Thrawn and defeated him, taking the evil Chiss to an unknown part of the galaxy.

Ezra is a human male who wears a dark orange undershirt with a dark tan vest. His legs are the same orange colour as his arms, but they are printed with numerous guards and a belt. He has long black hair, the same Severus Snape's most recent variation, but also has an interchangeable imperial helmet. 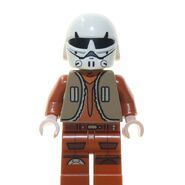 With blaster in hand 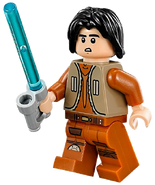 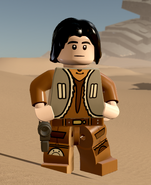 Français Nederlands Polski
Community content is available under CC-BY-SA unless otherwise noted.
... more about "Ezra Bridger"
RDF feed
Accessories
Blaster, Lightsaber +
Appearances
75048 The Phantom
75090 Ezra's Speeder Bike
75158 Rebel Combat Frigate +
ArticleRating
3 +
Image
75158 Ezra Bridger.jpeg +
InfoboxTemplate
Minifigure +
ShopDescription
A Force-sensitive youth from the planet Lo … A Force-sensitive youth from the planet Lothal, Ezra Bridger spent his childhood swindling and stealing from the Imperial forces occupying his homeworld. Since joining Lothal’s team of rebels, Ezra has discovered that there is a much bigger galaxy out there than he ever could have imagined.ut there than he ever could have imagined. +
Theme
Star Wars +
Title
Ezra Bridger +
Years
2014-2016 +
Advertisement