Brickipedia
Register
Don't have an account?
Sign In
Advertisement
in: Class 2 articles, Minifigures introduced in 2014, Minifigures (theme),
and 2 more
English

Fairytale Princess is a minifigure that was released in 2014 as part of 71007 Minifigures Series 12. It originally was to be released in October, but it had been released in Hong Kong and the Untited States on the 23 of September.

The Fairytale Princess has a lavender cone hat with an auburn color braid that is connected to it. She wears a purple dress and holds a green frog. She also has a necklace with a purple gem and a swirly design on part of the dress. Her alternate face is her with her eyes closed getting ready to kiss the frog. 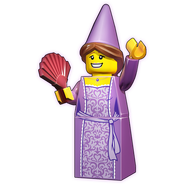