Falcon is a Marvel Super Heroes minifigure that appeared in 2014.

Falcon has a black combed back hairpiece and a white head printed with eye holes and a mouth hole showing reddish brown skin and there is a gold triangle between of the eyes, and a second face with a grinning expression. He comes with translucent dark red wings. His torso is red with yellow hand and the torso is printed with a large white collar and a white belt,the muscle's cut on his suit, a feathery design is along each sides of the torso. The back printing is similar to the front. He has unprinted red legs.

Sam Wilson was an agent for S.H.I.E.L.D. who Iron Man offered a chance to join the Avengers. Wilson accepted the offer and J.A.R.V.I.S. suggested the War Machine armour, but Wilson refused and instead chose an armour dubbed "Project Redwing", which allowed him to fly, shoot explosive feather-like projectiles and has visual scanning similar to Iron Man's and became the Falcon.

He arrived on scene to battle Hydra, MODOK, and Red Skull (who was in Captain America's body to survive), alongside Iron Man, Hulk, Hawkeye, Black Widow, Thor, and Captain America (who was in Red Skull's dying body). Falcon managed to get Cap and Red Skull back into their own bodies. He was also fired from S.H.I.E.L.D. by Nick Fury and hired to the Avengers. He later helped get Iron Man to the Avenger's Mansion, but was later mind-controlled by MODOK along with Hulk, Thor, Hawkeye, Black Widow, and Captain America to battle each other until they were cured by Iron Man. When Red Skull then set a potent bomb in the mansion's reactor core, Falcon and Thor used their abilities to lift the core into space where it exploded. He now is a rookie to the Avengers and hides out alongside them in Avengers Tower. 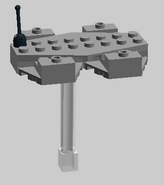 Retrieved from "https://brickipedia.fandom.com/wiki/Falcon?oldid=1719298"
Community content is available under CC-BY-SA unless otherwise noted.