"Wake up Zane, I know where you come from."
―The Falcon from Zane's dream.

The Falcon is a robot created by Zane's father that has a "strange connection" with Zane. The Falcon first appeared in the TV series, and released physically in 2014, in the NinjaCopter set.

The Falcon first appeared in episode 2, when Zane followed it after dinner. It lead him to Lloyd Garmadon's secret headquarters, a treehouse. Later in the same episode, it lead him to a ship called the Destiny's Bounty, which the Ninja used as their new Monastery after the Hypnobrai burned down their old one.

Its third appearance is in episode 4, where the falcon spoke to him in his dream in his dream, and again, when he wakes up from his "dream" and meets Lord Garmadon, and the Green Ninja saves him.

The fourth appearance aired was episode 7, when it led the Ninja to a snowy place. Along the way, the Falcon fell. When Zane saw him fall, he found out the Falcon was a robot. The Falcon had lead Zane to a tree fortress, which used to be Zane's home. After, Zane found out he was a robot, and then unlocked his true potential.

It's fifth appearance, in episode 8, he is seen briefly for a moment with Zane, during Nya's lecture.

Its sixth appearance is Episode 10, where the Falcon is now programmed to alert the ninjas if the Serpentine are spotted. It can record and transmit video to the ninja, thus, allowing them to see the Serpentine heading toward the Fire Temple. Also, the Falcon has a radio, allowing someone to talk over the radio.

The final scene is episode 11 when the ninja are going to the Mountain of a Million Steps and Zane tries his falcon vision when a Venomari snake spits its venom into his eyes.

The falcon was captured by the Stone Army when trying to spy on them in the Dark Island in The Last Voyage, though Zane later retrieved him.

In Blackout Zane sent the Falcon to alert Lloyd and Garmadon as to the continued threat of the Digital Overlord, unaware that he had developed a means of tracking the Falcon, enabling him to locate the exact position of the pair.

Following Zane's reconstruction as the Titanium Ninja, the Falcon underwent a similar process of being rebuilt, with its body now appearing clearly robotic as opposed to resembling a real bird. It can also be compacted into a smaller form that Zane can store within his body until he has need for it.

"Gosh, that bird just keeps going!"
―Kai about the falcon.

"For what reason have you returned?. . . Lord Garmadon!"
―Zane to Falcon

The falcon first made its debut in the season two episode Home. Zane decided to follow the falcon when it copied Zane's movements. The falcon lead him to the construction of Lloyd Garmadon's tree house. Later that day, Zane followed it again and was lead to Destiny's Bounty. He reappeared in the episode Never Trust a Snake in Zane's dream of meeting the "Green Ninja". In the dream, the falcon spoke to Zane. He makes another appearance in the episode, "Tick Tock" and leads Zane and the ninjas to a hidden work shop where Zane learns about his past and family and he discovers he is a Nindroid and the falcon is a also a robot, both created by Zane's father. Later, Zane reaches his full potential. In Zane's dream he speaks to him and is voiced by Paul Dobson who also does the voices for Sensei Wu and Rattla. In Episode 11 when Zane hallucinates, he looks out of its eyes to see everything how it really looks like. In Episode 10 the falcon is used as a radio that Nya uses to warn the ninja about using the Golden Weapons. It also appeared in the Fire Temple's core after Kai pulled out the Sword of Fire. 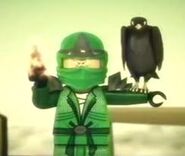 Lloyd and The Falcon within Zane's dream

"Zane, I know where you come from."

With Zane and his father

Zane looking through the eyes of The Falcon

Through The Falcon's eyes 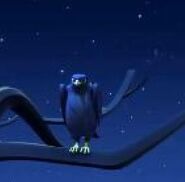