Fang-Suei is a minifigure from the Ninjago theme released in late 2011. His name is a pun on Fung-Suei. According to the Toys R Us description, Fang-Suei can turn a human into a snake with a bite. According to his character card, his dominant element is fire.

This serpentine minifigure is red with a white torso and a bone necklace. He has a new headpiece which depicts a snake-like head with a black spike down the top of his head.

Fang-Suei is a member of the Fangpyre snake tribe. [1] In the trailer for the new TV series, a Fang-Suei is hit on the head with a snake staff that fell from the Destiny's Bounty in Snakebit. In the same episode, he and Snappa turn things in the junk yard. In Can of Worms, he is seen in the Serpentine gathering underground Ninjago City talking to Mezmo from the Hypnobrai tribe, who was a possible friend of his until the rumours. [1]. 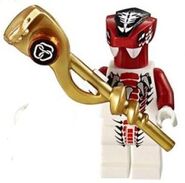