Faora is a DC Universe Super Heroes minifigure released in 2013. She was included with the Man of Steel-based set 76003 Superman: Battle of Smallville.

Faora has a wavy, quaffed hairpiece in black and reuses Wonder Woman's head. Her body suit is printed with a feminine shape and has a dark colour scheme of black, grey, and silver, matching fellow Kryptonians General Zod and Tor-An. In the center of her torso is a shield with a Kryptonian "F" insignia in silver. There are stylized lines at the top and sides of the torso which continue midway down her legs.

She comes with a helmet similar to Zod's and features an armour part that has a spike on the right, and a silver plate on the left. She also has a newly moulded Kryptonian gun.

Faora Hu-Ul was the right hand of General Zod and helped him overthrow the council. However, they were stopped and banished to the Phantom Zone for their crimes. After Krypton's destruction, they were free to leave, and searched many years for Jor-El's son Kal-El, who had the codex needed to rebuild Krypton.

Years later, they located him on Earth and ordered that he turn himself over. After he did so, she was sent to retrieve him and also brought back Lois Lane. They promptly escaped and she battled with Colonel Hardy and Superman, but was easily defeated.

She then attempted to stop Hardy from destroying the Black Zero, but failed, and was among those brought back to the Phantom Zone.

In LEGO Batman 3: Beyond Gotham. 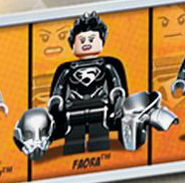 Faora without her accessories 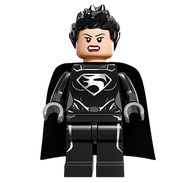 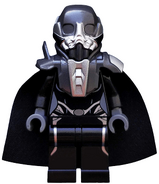