The Fat Lady is a portrait who guards the entrance to Gryffindor Tower at Hogwarts. She demands a password from the students before she lets anyone in and only lets in Gryffindor students. Once the password is obtained she swings backwards allowing the students to enter. In the film the fat lady is an old, simple woman who wears a plain pink dress. In film 3, the fat lady is portrayed by Dawn French. She wears a simple white dress and sings hysterically to a goblet while refusing to open her portrait hole. In LEGO, the Fat Lady piece is is Part 40249px2.

In the video game she has a white dress and black hair. She also carries a yellow goblet, but she's unplayable in the game. Later in the sequel, she appears as a playable in the console versions of the game. 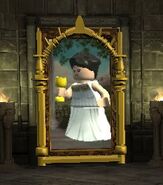 The Fat Lady in the video game 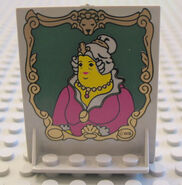 Another angle of the part