Brickipedia
Register
Don't have an account?
Sign In
Advertisement
in: Class 4 articles, Cars (Disney), Minifigures introduced in 2011,
and 2 more
English

Fillmore is a vehicle from the Disney theme, Cars. He has only appeared in the set: 8487 Flo's V8 Café.

Fillmore makes organic fuel and is sort of a hippie. He plays what he calls the "classics" and lives in a brightly coloured tent. He often at night goes out to look at the traffic light that only blinks yellow. He is very friendly and says that the "gas companies that feed us lies" to help promote his business. He also is a Volkswagen. In Cars 2, he is part of Lightning McQueen's pit crew. 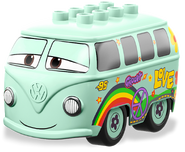 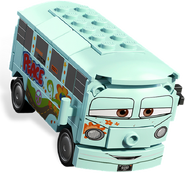