Brickipedia
Register
Don't have an account?
Sign In
Advertisement
in: Class 4 articles, Batman Minifigures, Minifigures introduced in 2008,
and 4 more
English

Garfield Lynns, also known as The Firefly is a firefly-like villain only available on the Nintendo DS version of LEGO Batman: The Videogame. He carries a fireball blaster and can glide in midair with his jetpack. He is also a villain in the DS Villain Hunt. He is available to purchase after you find him in Villain Hunt, and costs 700,000 studs to unlock. He reappears in LEGO Batman 3: Beyond Gotham and LEGO DC Super-VIllains with a design almost identical to his appearance in "The Batman". He appears physically in 76117 Batman Mech vs. Poison Ivy Mech.

Garfield Lynns was a Hollywood pyrotechnician until his pyromania was discovered by the directors. He then turned into the arsonist Firefly as a hobby and job, using a homemade flamethrower and jet pack. He became an enemy of Batman.

In Lego Batman: The Videogame, he appears in the Villian Hunt in the DS version. In Lego Batman 3:Beyond Gotham, he gets to the Watchtower with other villains and is used to incapacitate Martian Manhunter. After being knocked out by Flash and Wonder Woman, he gets up, but Flash extinguishes the flames around Martian Manhunter, who then grabs Firefly and subdues him. The group leaves him and Killer Croc in the Watchtower as they go to find the lanterns. Later, he is put in a cage by Superman on Earth, but escapes. At the White House, he is seen counting money, but is captured and put in prison. 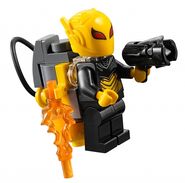