When gifted science student Jason Rusch and high school athlete Ronnie Raymond were caught in a lab accident, their molecular structures fused together into the nuclear-powered hero known as Firestorm™. The accident that fused the two personalities also granted Firestorm the ability to fly and change the atomic structure of anything inorganic. While the two teenagers have very little in common, when they work together Firestorm is one of the most powerful Super Heroes on Earth. 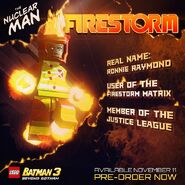