The First Order Flametroopers were elite members of the First Order's Military. Unlike regular Stormtroopers, Flametroopers used flamethrowers in combat. Usually two or three of them were inserted into standard ten-trooper units, which helped them ransack settlements quickly. 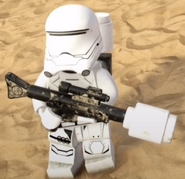