The First Order Stormtrooper has a white helmet with black eye slits and a black "w" shaped line across the face of the helmet, along with vents on the side and a flashlight device on the bottom left. They have a white torso with buttons and gorges, white utility belt with pouches, and white pants with boots and bracing along the side. They have a blaster and white arms and hands.

Approximately thirty years after the Battle of Endor, stormtroopers fought for the First Order in a conflict against the Resistance. By then they served under the command of Captain Phasma, a veteran officer and member of the First Order's commanding triumvirate along with General Hux and Kylo Ren. The objective of Phasma's relentless training program was to produce the finest soldiers in the galaxy—promoting ruthlessness, yet also improvisation on the battlefield. As a result, the First Order stormtroopers were more dangerous than their Imperial precursors. 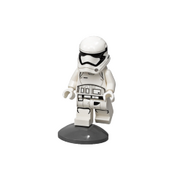