Fishface is a Teenage Mutant Ninja Turtles minifigure released in 2013.

Fishface consists of five parts. The first is dark pink and is shaped like a large, mutated fish. The piece has small, yellow eyes, large, sharp teeth, and an orange breathing system. The piece also has a large fin that has a chunk missing and a long tail. He has two light pink arms on each side of his body. He also has two ridged, metal legs that are exclusive to his figure.

Born in 1990 in Sao Paulo, Xever Montes was orphaned at a young age and grew up on the city streets, stealing to survive. One day he attempted to steal a briefcase from a hotel room, but was caught and imprisoned. However, the owner of the briefcase, Oroku Saki (best known as "the Shredder"), found Montes's skills may be useful to the Foot Clan, so he bailed the street thug out and employed him for dirtier jobs such as major theft and assassinations. During his employment, Montes formed a rivalry with Shredder's star pupil, Chris Bradford.

In the episode "New Friend, Old Enemy", when Shredder discovered his old enemy Splinter was in New York and had a clan, he traveled there and ordered Montes to assist Bradford in finding Splinter and the turtles. Many unsuccessful attempts were made. In one attempt in the episode "The Guantlet", Montes and Bradford were cornered by the turtles. In an effort to take the turtles down with him, Bradford stabbed a tank of mutagen, but this instead had the stream of mutagen spurting from the bomb miss the turtles and hit Bradford and Montes, turning Montes into a large mutant snakehead-like creature with powerful stick-like arms, fangs carrying a venom that produces fever, nausea and hallucinations, aquatic breathing and superhuman swimming speed (due to him previously holding an exotic pink snakehead at a Chinatown market stall).

Montes's legs were lost in the mutation, so Shredder, seeing that he was useless to him if he could only fight in water, employed Baxter Stockman to build him bionic legs and a breathing apparatus. In the episode "The Alien Agenda", Stockman struggled at first, but then Karai brought him some stolen Kraang technology, which Stockman used which to give Montes better control over his legs. When the turtles see Montes in his new form in the episode "The Pulverizer", they just laughed at him, and he was given the name "Fishface" by Michelangelo, but they soon realize what they were up against when Fishface kicked Michelangelo into the wall and bit Raphael in the shoulder. He was defeated when Donatello came barging in with the Shellraiser and blasted him away with a trash-ball cannon. In "Baxter's Gambit", Stockman trapped the turtles, Fishface and Dogpound in a giant deadly labyrinth, but they managed to escape and reach Stockman, who then escaped in return at the last minute. In the episode "Showdown", when Splinter came to rescue April O'Neil from Shredder's clutches, he easily defeated Fishface by knocking him into the water and letting him retreat with Dogpound. In the episode "Mikey Gets Shellacne", Fishface witnessed Dogpound getting mutated by Stockman's mutagen supply int Rahzar and got electrocuted by Michelangelo. In the episode "Wormquake", he unveiled a new weapon to Raphael: a larger butterfly knife called a balisword.

He is one of Raphael's arch-enemies, alongside Spider Bytez. 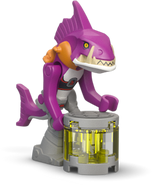 A CGI of Fishface

Fishface
Add a photo to this gallery