Brickipedia
Register
Don't have an account?
Sign In
Advertisement
in: Unrated articles, Articles in need of expansion, Minifigures introduced in 2011,
and 2 more

Flame was the dragon who guarded the Sword of Fire, one of the Four Golden Weapons, before merging with its fellow guardians to become the Ultra Dragon.

Flame was charged by Master Wu with protecting the Sword of Fire, and thus dwelt at the Fire Temple. He was later awakened in "King of Shadows" by Lord Garmadon, who used him to block Kai, Nya, and Wu from escaping with the sword. However, in "Weapons of Destiny" Kai succeeds in befriending Flame, and his fellow Ninja follow his example to tame Rocky, Shard, and Wisp. Using the dragons' power to travel between worlds, the Ninja then make their way into the Underworld to rescue Wu.

In "Day of the Great Devourer", it is revealed that Flame has merged with the other three dragons and become the Ultra Dragon. 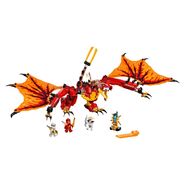