"We've been expecting you..."
―Fluminox to Eris

Fluminox is the leader of the Phoenix Tribe, and will appear as a minifigure in summer of 2014. He has two variants: one with a sloped 'robe' piece for the Phoenix Temple and a version with legs so he can sit on his Speedor in Inferno Pit. He also uses a new and exclusive harness for his wings, with a collar and golden feather patterns engraved on it.

In Episode 29, he appears in one of Eris' visions and he is seen physically at the end when Eris, Laval and Cragger discover the Phoenix Temple.

Due to not taking the fire wing armor, he caused the death of all 8 Phoenix Elders. He left them because he couldn't leave his son Flinx who was a baby at the time.

Fluminox in the TV Series 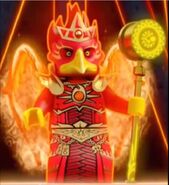 Add a photo to this gallery
view · talk · edit Legends of Chima Minifigures
Retrieved from "https://brickipedia.fandom.com/wiki/Fluminox?oldid=1951247"
Community content is available under CC-BY-SA unless otherwise noted.