Brickipedia
Register
Don't have an account?
Sign In
Advertisement
in: Class 4 articles, Articles that don't have images in their infoboxes, Harry Potter,
and 4 more

The Flying Ford Anglia is a light blue and white flying car. It has an invisibility booster which can turn the car invisible. It is owned by Ron Weasley's father, Arthur Weasley, who added features to this originally muggle car and enchanted it to fly. The car was used by Ron, Fred, and George to rescue Harry Potter from Privet Drive, after which they returned to The Burrow where Molly Weasley scolded them for flying the car without permission. Later on, Harry and the Weasleys went to Kings Cross to get onto the Hogwarts Express. After everyone else went through the barrier concealing Platform 9 3/4, the wall would not allow Ron and Harry to pass through (because Dobby the house elf used magic on it) so they missed the train. Harry and Ron then flew the car to Hogwarts (Without telling Arthur and Molly). Coming up to Hogwarts, Ron lost control of the car, broke his wand in the process, and drove into Whomping Willow. After they hit the tree, the Whomping Willow started to attack them, and eventually hit them to the ground where they narrowly missed being smashed. The car then flung Harry, Ron, and their belongings onto the ground. The flying Ford Anglia then drove off into the Forbidden Forest, where it eventually turned wild. Later that week, Ron's mother sent him a howler, yelling at him for stealing the car and driving it to Hogwarts. Much later, the car saved Harry, Ron, and Fang from Aragog's children and drove them out of the forest and back to Hogwarts. The car however, returned to the Forbidden Forest.

Harry and Ron in the flying car in the video game 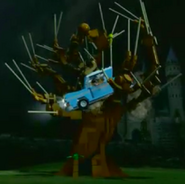 The Ford Angila in the Whomping Willow (video game) 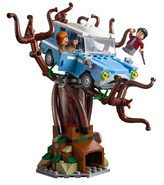 The Flying Ford Anglia in the Whomping Willow