Foal is a young horse that appears in the theme Friends and LEGO Disney. So far four variants have been produced.

The foal has his own exclusive foal mold. It has long legs with big rounded feet, the front pair is joined as well as the hind pair. The space between the hoofs is where it can connect to studs. The creature's body is slim and its back is smooth apart from a single stud where bricks can sit. Some accessories, such as crowns and bows, can be placed at the base of its short tail. The foal has a bent neck with short mane. Its head is also bent, it has brown eyes with black and white pupils and long eyelashes. It has appeared in four colour variations so far; white, tan, reddish brown, and black.

This mold comes in four variations.

The first variation is all white. It has brown eyes. This variant appears in one set.

The second variation is all tan. It has pale blue eyes. This variant appears in four sets.

The third variation is all reddish brown. It has brown eyes. This variant appears in two sets.

The fourth variation is all black with a grey patch around each eye. It has grey eyes. This variant appears in four sets.

All the foals live in Heartlake City.

The white foal is named Snow. She is Olivia's new pet, she is only a new born so she has to take extra care of her, helped by a horse expert Mia.

The tan foal is named Fame in one set and lives in the Sunshine Ranch attended by Mia and Liza. In other sets it is left unnamed.

The reddish brown foal is left unnamed in its first appearance, in 41089 Little Foal, but is named Dolly in the second set it appears in.

The black foal is named Diamond and lives at the Heartlake Riding Club, but only upon its first appearance. After this it is left unnamed, appearing in a further two sets under the Friends theme. 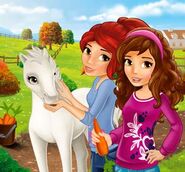