This article is about the Teenage Mutant Ninja Turtles minifigure. For the Marvel Super Heroes minifigure, see Alien Foot Soldier.

The Foot Soldier is a Teenage Mutant Ninja Turtles minifigure released in 2013.

The Foot Soldier's head is black with a red bandanna around the top and silver eyes with little holes in them. His torso is black with ninja robes and small, brown straps running from the top right corner of his torso, to the bottom left corner. The back of his torso features the continuation of his ninja robes and a brown sword sheath. This variation of the Foot Soldier features black, unprinted legs.

The Foot general's head is black with a red bandanna around the top and silver eyes with little holes in them. The front of his torso is black with black ninja robes, a white under-shirt and red straps. The back of his torso features a red collar, continuation of the ninja robes and a red sword sheath. The Foot General's legs are red with black knee-pads.

A variant based on the 2014 Teenage Mutant Ninja Turtles movie is set for release in 2014.

The Foot Soldiers are the grunts of the Foot Clan. Despite being highly trained, many of them are bested easily by the Ninja Turtles and their allies, with few exceptions. The Foot Soldiers are commonly clad in black robes with the higher ranking individuals wearing different coloured robes, such as the red robed variation. 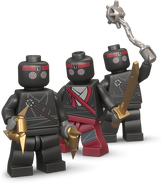 A CGI of two Foot Soldiers and a Foot General 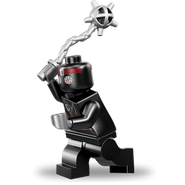 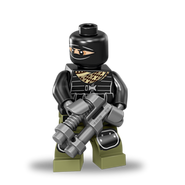 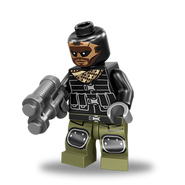