"Have no fear, for I am here!"
―The Forestman

The Forestman, also known as Robin Hood,[1][2] is one of sixteen minifigures from 8683 Minifigures Series 1. He comes with a quiver and a cap and bares some resemblance to the old Forestmen, but with greater details. He also appears in The LEGO Movie

The Forestman has green legs and hips. He has a green torso with a printing of a brown belt with pale studs. A strap runs diagonally from his right shoulder to his left hip. Both the belt and the strap have buckles. The upper portion of the torso is a darker green than the rest of it and has a tan collar at the top. He has tan-sleeved arms and yellow flesh tone. The forest man has a light brown beard, moustache and eyebrows as well as black eyes and a slightly open mouth showing white teeth. He has a green hunter's hat with a small red feather in it. The forest man comes with two accessories: a bow and a quiver.

In The LEGO Movie, the Forestman is among the Master Builders that meet in Cloud Cuckoo Land. Vitruvius refers to him as Robin Hood and he is the first Master Builder to be acknowledged to during the meeting. Emmet also dresses up like him for a minute.

Did You Know Edit 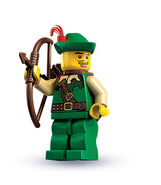 The Forestman as seen in The LEGO Movie.