The Fox Costume Girl, also known as Fox Girl,[1] is a Minifigures character who debuted as a background character of The LEGO Movie 2: The Second Part. 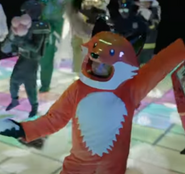 As a Human in A LEGO 2020 holiday ad.
Add a photo to this gallery