Frank the Foreman is a minifigure released in 2014 as part of the LEGO Movie theme. He is voiced by Keegan-Michael Key.

Frank was a construction foreman who was the boss of Emmet, Gail, Wally, Barry, and Randy. At first he and the others viewed Emmet as a plain, boring, guy with no personal thoughts and feelings, but after Emmet saved the universe from Lord Business they came around and accepted him. 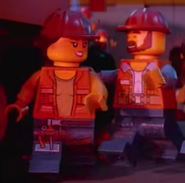