Fredrick (Freddy or Fred) Herman Jones is one of the three tritagonists of Hanna-Barbera's Scooby-Doo franchise. This minifigure was released in August 2015 as part of the Scooby-Doo theme. He appears in the set 75902 The Mystery Machine. 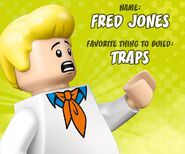 Français Polski
Community content is available under CC-BY-SA unless otherwise noted.
... more about "Fred Jones"
RDF feed
Appearances
75902 The Mystery Machine +
ArticleRating
4 +
Image
LEGO_Fred.jpg +
InfoboxTemplate
Minifigure +
ShopDescription
Fred is the glue that keeps Mystery Inc. t … Fred is the glue that keeps Mystery Inc. together, and his mind is always two or three steps ahead of the monster they’re after. He sees mysteries as a chess match, and nothing makes him happier than planning genius and elaborate traps to catch ghosts, vampires, bogeymen and more!catch ghosts, vampires, bogeymen and more! +
Theme
Scooby-Doo +
Title
Fred Jones +
Years
2015 +
Advertisement