Fred is one of the members of the Weasley family. Along with his twin brother George Weasley, he is the family jokester. He and George were both Beaters on the Gryffindor Quidditch Team. In Harry's fifth year, he and his brother joined Dumbledore's Army, and then the duo left school to start their joke shop, Weasley's Wizarding Wheezes. Fred eventually dies during the Battle of Hogwarts in Harry Potter and the Deathly Hallows, but George Weasley and his wife, Angelina Johnson, had a child named Fred Weasley II in his honour.

Fred Weasley in the video game

Fred (left) as he appears in the game.

Fred (left) as he pulls Harry into the passage. 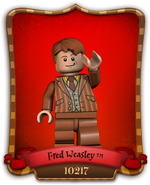 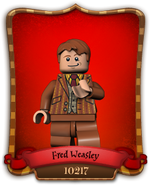