This article is about the LEGO Racers figure. For The Batman minifigure, see Mr. Freeze.

Freeze is a Rama alien minifigure from the LEGO Racers theme. Freeze appeared in the video game LEGO Racers 2 as a CPU racer on Xalax.

Freeze is a cool daredevil that can drive very well on ice and snow. Also he is in complete control of his car when it skids. 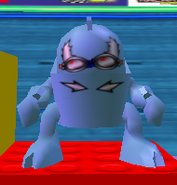